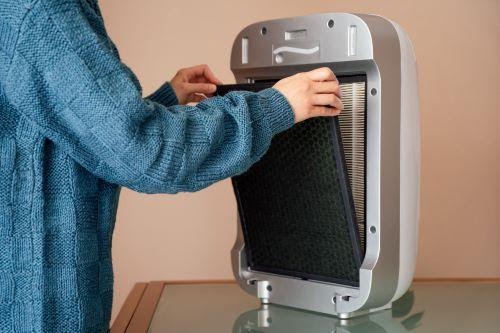 Many recurring health problems are either a direct result of, or at the very least exacerbated by, poor air quality. These include problems such as asthma, bronchitis, emphysema, and even heart disease and some types of cancer. In addition, unclean air can carry bacteria, viruses, and mold spores, leading to an increased risk of disease among the inhabitants of a building.

With this much risk attached to unclean air—and with our air filled with more contaminants than ever before—homeowners are turning to advanced technology, such as air scrubbers, to protect the health of their families. But what is an air scrubber? How does it work? And is it really the best way to keep the air in your home as clean as possible? Read on to find out.

When the inhabitants of a building begin to suffer negative health effects that can be directly traced back to poor air quality, this is known as sick building syndrome or SBS. When this occurs, inhabitants may begin to complain of headaches, sore throats, nausea, fatigue, and other concerns. Over time, these complaints may develop into more serious health issues, but they can be reduced or even eliminated by improving the air quality.

What makes addressing the problem of sick building syndrome difficult is the fact that it has so many causes. There is no single cause of poor air quality. It can be the result of anything from pet dander, to cigarette smoke, to dust and dirt, to humidity that accelerates the growth of disease-causing microorganisms.

How It Is Addressed

Without a clear-cut, simple cause, it’s difficult to address SBS with an easy solution. There are several methods to mitigate the issue, although these will usually not eliminate it entirely. Improving ventilation is usually a good start. Removing risk factors such as cigarette smoke from the home may also help. Inevitably, however, contaminants will still creep in, and these must be removed by the building’s HVAC system.

Traditionally, air filters in a home’s HVAC system have been expected to do the entire job by themselves, and while good quality filters are quite excellent at filtering out particulate matter, they aren’t capable of catching everything. Small dust particles often manage to bypass the filters, as can bacteria and other microorganisms too small for them to catch.

Recently, more advanced technology has been developed that can purify the air to a level that has previously not been achievable. HEPA filters—an acronym for high-efficiency particulate air filters—manage to catch about 99.7 percent of contaminants that pass through the HVAC system. Even better is to make use of an air scrubber to improve the effectiveness of these filters.

The question of what an air scrubber is answers itself if you know them by their other name: portable air purifiers. In effect, they are small devices that can attach to your existing HVAC system in order to effectively cleanse the air that passes through it. There are several technological mechanisms that allow it to do this.

Air scrubbers make use of ultraviolet (UV) light in order to kill dangerous organisms such as bacteria and mold spores. As the air passes through the HVAC system, the air scrubber bombards it with this UV light, which scrambles the DNA of harmful microorganisms, ultimately killing them. It also destroys larger organisms, such as dust mites, which are responsible for many people’s dust allergies.

Air Scrubber Plus is a proprietary technology that generates negative and positive charges. The negative ions that are produced begin to attract particles, forcing the dust in the air to form clumps. These clumps then become too big to remain in the air, so they either become trapped in your filter system or fall harmlessly to the ground. The reduction of these particles translates to reduced allergens in the air.

What Are the Other Benefits?

What more is an air scrubber than an effective instrument for cleansing the air more effectively than other commercially available technology? It actually brings with it many other benefits as well, however, most of which are indirectly sprung from its ability to effectively clean the air.

One benefit you may notice that results from the installation of an air scrubber are a marked reduction in odours. Odours, of course, are themselves caused by tiny particles in the air. These particles are removed through the Air Scrubber Plus technology, leading to a much fresher-smelling environment, and all without using chemicals that are themselves contaminants.

Over time, you may also notice a reduction in your energy bill and that your HVAC system itself requires less maintenance over the years. With less particulate matter clogging the filters, the HVAC system will actually work that much more effectively. This will extend its useful life while also saving you money.

Another major benefit is that having an air scrubber installed in your HVAC system may also reduce contaminants on surfaces in your home. These include viruses and bacteria that sit on countertops and contribute to food-borne illness. The air scrubber can do this as an indirect result of cleaning the air that would otherwise carry these pathogens to those surfaces.

How Do I Get One?

If you are interested in air scrubber technology for your home or business, discuss having one installed with your HVAC professional. If you don’t have an HVAC professional on-call already, do some research to find one in your area who specializes in air scrubber technology. For example, if you are in the Pacific Northwest, look for Entek HVAC. Having been in business since 1946, we’re highly experienced while also being up to date on the latest technology in the HVAC industry. Entek is an excellent example of the type of company you should be looking for when you’re shopping around in your area: both highly experienced and cutting-edge. Contact your local HVAC professional and ask them about having an air scrubber installed in your home.

Previous Post Understanding Tricuspid Valve Disease And What It Is?

Next Post How To Bring Back The Lost Passion Of Your Traders?